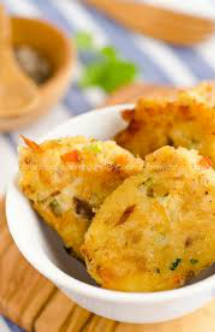 Lunch and dinner usually begin with appetizers such as bacalaitos (crunchy cod fritters), empanadillas and soups. 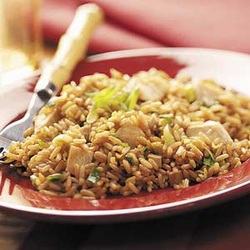 Adobo and sofrito are blends of herbs and spices that give many of the foods their distinct taste and color. Abodo is made by blending peppercorns, oregano, garlic, salt, olive oil, and lime juice, and is rubbed into meats before they are roasted. Sofrito is a combination of aromatic ingredients like onions, garlic, coriander and peppers browned in olive oil and colored with achiote (annatto seeds), which gives the bright yellow color to rice, soups and stews.

Traditionally for picnics or large outdoor parties, Lechon asado (barbequed pig) is cooked. The pig is basted with sour orange juice and achiote coloring, and served with a traditional sour garlic sauce. Green plantains are roasted and served as a side.

Puerto Ricans produce a wide variety of vegetables. Plantains are a variety of banana which can be  eaten ripe, baked, fried, or boiled. Deep fried plantains may accompany fish, meat or poultry dishes. The national dish, called mofongo is made with fried and mashed plantains mixed with shrimp, bacon, olive oil and garlic.

Rice is a staple food of the Puerto Rican diet and can be prepared in many ways including white with kidney beans or with garbanzo beans. 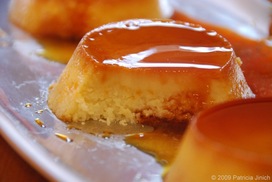 Coconut is the most common dessert ingredient. Its milk is used in coconut flan, coconut cream desserts, and candied coconut rice.

Pumpkin is not only used as a vegetable or to flavor soups, but also to make the base of  traditional Puerto Rican cakes.

Many preserves and jellies are made in Puerto Rico. Papayas are made into desserts with sugar, cinnamon, and vanilla extract. Mangoes may also be used as a preserve or may be eaten raw. 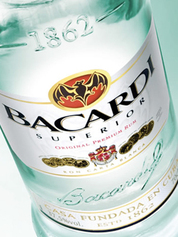 Puerto Ricans are typically heavy coffee drinkers, whether it be black or with milk (cafe con leche)

It is normal to order a beer (cerveza) while dining out, since wine is not produced. The most popular brand of beer is called Medalla.

Puerto Rico is the world’s leading rum producer, which is also their national drink. Local favorites include Rum and Coke (Cuba Libre) and Pina Colada (made with coconut cream and pineapple juice).

Other traditional drinks include;
Malta (soft drink)- Puerto Rico withhold more companies producing Malta then any other in the Caribbean and Latin America.